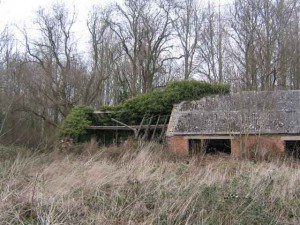 This is how the clubhouse looked way back in November 2008, just after we had first acquired the site.  The task which lay ahead for all our members was truly daunting.  Undeterred members first set about clearing the site for access before securing the structure of the building for safety reasons.  Once all was safe, we set about refurbishing the building and giving some thought to the internal fitting and what the members would like to see inside.  We could only open the doors to the public once all this had been completed and the safety and security of all was assured; once this had been achieved we would be able to exhibit our artefacts and show off all the skills that are preserved and presented for the benefit of current enthusiasts and also to foster the enthusiasm and interest of future generations.

Work originally started on the site and building in October 2008, a month before the first photograph was taken.  The CMVSES rents the site from a local farmer, who takes a great interest in all the improvements that are being made and is delighted to see what was once a derelict old barn, arise, like Phoenix from the ashes and serve a useful purpose again.  The long term plan of the members is not only to open the yard to the public but also to offer the younger generation the chance to learn all aspects of farming and the way it was done in days long gone, from our wealth of experienced members.  All this expertise is shared willingly and adds up to uncountable years of experience in the art of many rural crafts rarely seen today, plus many more that are still around.  The club hope to extend the life of pole lathing, wood turning, folk art, chair bodging, clock making, welding mechanics, fabricating and building, to name but a few, and new skills are always welcome.  Along with this we are able to show static displays from the old farmhouse kitchen and dairy, along with old toys, lamps and tools etc.  A pipe-dream for the future is to have a permanent small museum in its own, purpose built building, - maybe this is not too far off.

One of our greatest strengths is that because we have such a diverse cross-section of skills, all the work on the clubhouse has been done by our own club members, led by the redoubtable Bob.  He has been ably supported by Ted, Tommy, Robin, Aubrey, Phil, Danny, Ken, Dave and Mike, all of whom have worked extremely hard, even occasionally contributing financially to the rebuild. As member we are greatly indebted to them all and hope to enjoy their continuing and future support.

Having sorted out the shell, phase two was to install utilities and a working kitchen.  Water and electricity were becoming essential and at the same time a grant was applied for to install a heating system and kitchen, sadly to no avail.  Thanks to the farmer paying for most of the materials and members supplying the labour; along with a rent waiver for five years, the whole site has come along in leaps and bounds, but, any additional help, skill or sponsorship will always be very gratefully accepted.

Thanks to everybody’s hard work and enthusiasm, the clubhouse was able to open to the public, with a fully functioning kitchen in August 2009, and by August 2010 conditions were even better when all the refinements and last minute touches had been put in place.

Home »Welcome »Our Facilities »The Clubhouse

The Well
Here is the Well. It is about 20ft deep and needed to be refurbished. Here it is just being filled with water, the brickwork is fantastic.

The Kitchen
Here we have the Kitchen having been given a fresh coat of paint after fitting out.

The plaster Gang
Picture of Phill &Danny (father and son) with Brian seated. Picture taken on 19th April 2009, the gang have just finished plastering part of the new kitchen.

She must work for the council.!

Robin with the Roller
One major aspect of the rebuild was the club yard itself. No small area, the yard has been flattened and resurfaced to accomodate vehicle movements and parking as well as a large display area.

Down comes the barn
It's not all building. Some things have to come down - permanently. Removing part of an old roof, very satisfying.

Hear all see all say nowt.
The three wise errrrm

Everything including the kitchen sink
July 2009 finds Robin hard at work in the Kitchen.

The Clubhouse 29th January 2009
Beginning to look good but a long way to go yet.

17th-April-,kitchen-painted.
Part of what will become the kitchen, having been placstered and received it's first coat of paint.